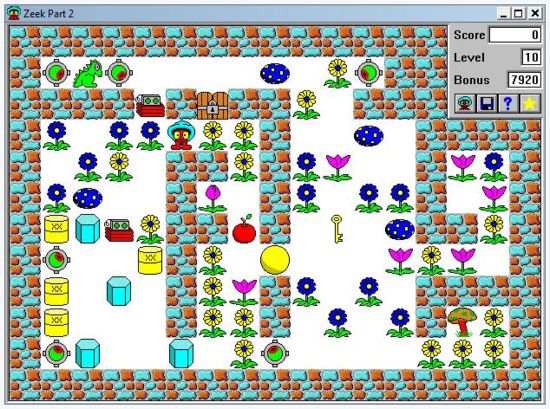 
Download:
• Part One
• Part Two
The nice Zeek needs to collect the flowers and treasures of each puzzle, which provide scores, and you must to go to the delicious edible mushroom, but careful with the poisonous flowers and mushrooms!, and especially be careful to carnivorous flowers! "Part One: Zeek's Wacky World" contains 15 fun and ingenious puzzles. In "Part Two: More Adventures in Zeek's Wacky World" (30 puzzles) are new elements and two nice characters: Piclasops, the dinosaur that eating flowers, and Atomic Eyes, which shoots laser beams.

All the puzzles are really clever and graphic design is incredibly nice.

I solved the puzzles of "Part One" and now I'm solving the "Part Two". The puzzles in this second part are more difficult and some I have had to repeat several times ... If you have a small oversight, the carnivorous flower swallow you, or the traitor Atomic Eyes - always hidden in a corner - to strike you with his laser beam ... The puzzle I'd liked very much is the # 17: almost did not solve it, but the solution is as simple as ingenious. This is the kind of puzzles that I like. Do you think you're be able to solve the puzzle # 17? :)
Recommended!