The game Soko-Ban was published in 1988 by the legendary Californian company Spectrum HoloByte, a video game developer for different platforms. Soko-Ban includes a total of 50 levels, which would be later known as the "Original" collection (perhaps it was Scott Lindhurst who gave this name to the collection: see below the comment about XSokoban). It was the first game of Sokoban marketed outside of Japan.

The Spectrum HoloByte company, founded in 1983, ceased to exist in 1998. In many abandonware websites you can download the game Soko-Ban (1988) of Spectrum HoloByte. The most common versions are for MS-DOS. Here are some sites:

(To play on your PC you can use the DOSBox emulator, although I use D-Fend Reloaded, easier.)

You can also play the online version for MS-DOS, here:

These are other websites where you can play online the "Original" collection (but with non-modified original maps of 1988: see below the comment about XSokoban). Unfortunately, they are not too many websites:

The copyright is common to all versions of Spectrum HoloByte:

On the other hand, design, programming and graphics, they change:


I am no expert on copyright, but I guess that the credits of Soko-Ban (including the 50 levels), belong to Spectrum HoloByte. In the manual of Soko-Ban appears the copyright of Sphere, Inc. (see image below): 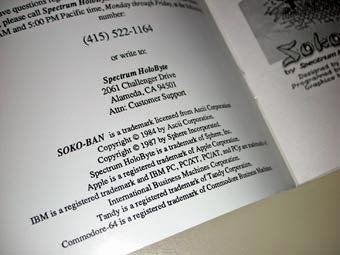 It is the same case as IQ Carrier (Radio Shack, Tandy Corp., 1995), an electronic hand game with 28 small puzzles of Thinking Rabbit, and whose rights belong to the American company Radio Shack. Scott Lindhurst included this collection "IQ Carrier" in its program Sokoban for the Macintosh (v. 2.0, 1996), but had to withdraw it shortly after due to this reason (as a former user of Sokoban for the Macintosh, I still remember this fact). What is the difference between Radio Shack and Spectrum HoloByte? Spectrum HoloByte disappeared in 1998.

These are some reviews of Soko-Ban that appeared in the specialized magazines:

In the maps of the different versions of Soko-Ban there are some errors. I indicate the most serious with an asterisk (*):

Level 36
*C-64: the interior wall in M6 is unnecessary. Despite this, the level is solvable
DOS, TRS-80: missing exterior wall in P13

In view of these errors, I presume that the first maps perhaps were those of Apple II, and then were copied to other platforms.

Origin of the levels of Soko-Ban

Some puzzles were expressly modified to include them in Soko-Ban. These changes were probably made by Thinking Rabbit, since they are very technical: generally, tend to simplify the maps, deleting unnecessary elements; but the difficulty is similar and even higher in some cases. However, Masato Hiramatsu explains that the changes were due to the need to reduce the size of some puzzles (of format 32x20 in the Japanese collections) to adapt it the much smaller format 19x16 of Soko-Ban:

Japanese official (?) screen size is 32x20 and some levels of "sokoban perfect" and "sokoban revenge" are designed in full-size. These large levels are omitted for other platform versions because of resolution of graphic hardware (I suppose).

Some of old IBM-PC version (called "original") have reduced width, and they are a little different from corresponding levels of "sokoban perfect". The reason for this size-reduction may be raw resolution of old IBM-PC (Masato Hiramatsu, "About Sokoban", 25 February 1998).

In some levels the author's name is known, for subsequent references in other Japanese collections.

Versions of the "Original" collection in subsequent collections


XSokoban (1989; first "official" version 3.0, November 1993) is a Sokoban game developed by Joseph L. Traub and Andrew Myers for X Window System  platforms. The game includes 90 levels, of which the first 50 are the "Original" collection, but with changes in several levels. The other 40 levels are of unknown author or authors, and were added - apparently - in version 3.0. The authorship of these 40 levels - quite good, despite its old look - is still a mystery. See the commentary of Rodolfo Valeiras, "XSokoban".

You can download the program XSokoban here, and the collection of 90 levels here:

The levels of the "Original" collection modified in XSokoban are these: 12, 20, 25, 37, 42 and 50. It is clearly intentional changes, to facilitate the solution of the levels. This modified collection already appears in the first unofficial versions of the program, in 1989 (see H. Bernau messages 1 and 2 in the Yahoo forum comp.sources.games, January 1989).

Scott Lindhurst included the XSokoban collection in its program Sokoban for the Macintosh (1992), but divided in two collections: "Original Levels" (levels 1-50; yes, the "Original" name seems that it comes from Scott...) and "Extra" (levels 51-90). Probably Scott did not realize that some levels had been modified. This lapse of Scott Lindhurst then led to great confusion with regard to the "Original" collection. In short: the levels 1-50 of XSokoban should be discarded by spurious.

Other programs included also the "false" Original collection: MacSokoban (February 1992), of Ingemar Ragnemalm, whose first version 1.0 appeared two months before that of Scott Lindhurst: the first 50 levels come also from XSokoban. And also, KSokoban (1998), of Anders Widell, for KDE platforms, etc. etc. Even was spread from such popular Sokoban programs as Sokoban 97 (1998) by Gerald Holler, Sokoban (1998) by Philippe Galmel, Tse's Sokoban (1998) by Tse Shum Fat, SokoSave Desktop (1999) by Eric Sunshine... And it is still distributed from www.sourcecode.se! As can be seen, the "false" Original collection had a wide diffusion from XSokoban. Even today, in the majority of websites on the Internet, the "Original" collection that we find, is the modified collection of XSokoban.

"Simple Sokoban" is an educational collection for children, adapted from XSokoban. You can download it here:

Or, if you prefer to play online, click here.

This collection was included in MacSokoban of Ingemar Ragnemalm and Sokoban for the Macintosh of Scott Lindhurst.

See also the article by Phil Shapiro, "The Educational Value of Sokoban Puzzles".

In 1993, Phil Shapiro made the levels in "Simple Sokoban" for those who found the original levels too difficult. He included the article "Educational Value of Sokoban," which describes his motivations and why you should be happy if your child spends all his time playing Sokoban (Scott Lindhurst, "Read Documentation. History, levels, and other implementations").

Here you can download the original collection "MacTommy inventions". I have extracted the maps of MacSokoban, and I have restored the original titles that have some levels:


Later the collection was included in KSokoban (1998), of Anders Widell, for KDE platforms. In the note about the authors, the author of "MacTommy inventions" is named "Tommy in Pennsylvania" (?). By the way, is a somewhat curious author's name; similarly, we could say: David W. in Missouri, Eric in Aruba, or Jordi in Catalonia, etc... The maps are identical to those of MacSokoban, but without the titles of levels. Later the collection was also included in Warehouse Guy 1.0 (2000), of True Dimensions.

The first levels of "MacTommy inventions" are inspired in levels of XSokoban. This is the correspondence:

Some levels of the excellent collection of Jean-Pierre Kent, "JPK Levels" (November 1988), are arrangements of XSokoban levels. See in this blog the post "My favorite authors - Jean-Pierre Kent".

The collection of 107 levels of the South African Kobus Theron (June-December 1999), could be downloaded from the old website of SokoMind. It is still possible to download the original collection on the Internet Archive, here:

In other levels there are also traces of the "Original" collection, but they are only minimum fragments.

First in "Fourth Set" (June-October 1999, 32 levels) and then in other sets that unfortunately are no longer available on the Internet Archive, Howard Abed remodelled several levels of XSokoban. I've taken the freedom to gather in a single collection all these remodels:

"Original remixed" (September 2009) is one of my own favorite collections. It is the "Original" collection, but highly remodeled, with major changes in the structure of many levels, which increase the difficulty. However, all levels retain their original appearance. You can download this collection here:

You can also play online here (in the drop-down menu, select the "Original remixed" collection).


Final remarks
- If you see an error or mistake in this post, please leave your comment below.
- Important. If you liked this post, you can make a donation. 1 € is good, 2 € is very good, and so on... :P  Thank you very much!