I started playing Sokoban with Scott Lindhurst's program, Sokoban for the Macintosh (v. 1.0, April 1992), but I stopped playing at the end of 2001, just when Howard Abed left and GRIGoRusha published his first collection. I was completely disconnected between 2002-2006. In 2006 I returned to the hobby to Sokoban, thanks to the Bulgarian online web SokobanBG.

I will never be sufficiently grateful to Scott Lindhurst and its "Sokoban for the Macintosh" for the exciting hours I spent with this game... 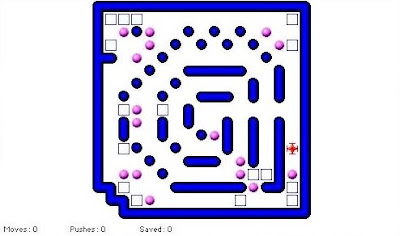 In the early 90's, the Internet barely existed in Spain (I had no Internet access until 1994 ...), but the collections were spread very efficiently through the BBS. In those early years, until 2001, I gathered a considerable archive of puzzles.

Now I'm ordering my old file Sokoban, and I find many surprises. For example, I found the original collection of J. Franklin Mentzer, "Still more!". 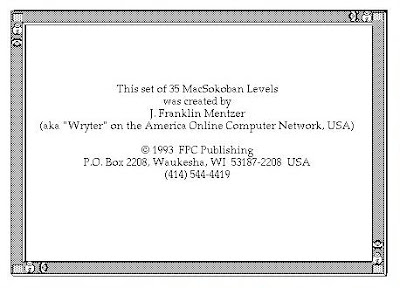 "Still more!" appeared in 1993, and was included - I think almost simultaneously - on MacSokoban, by Ingemar Ragnemalm (v. 1.0, February 1992) and "Sokoban for the Macintosh." However, there is a difference between the two collections: Scott Lindhurst "normalized" the maps (see above), so you lose the beautiful original drawing of many puzzles in the collection.

For example, here's the great puzzle #29 of "Still more!" on the original version, without "normalizing" (note that it is one more box! ...): 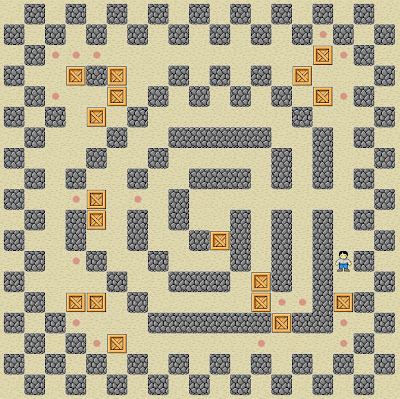 Later, "Still more!" was also included in KSokoban (v. 0.1.0, August 1998), by Anders Widell, to KDE platforms: they are the same maps as those of MacSokoban.
The collection "Still more!" is excellent, and one of the largest collections of difficulty and loveliest of those years. I recommend it. You can download the original collection here: